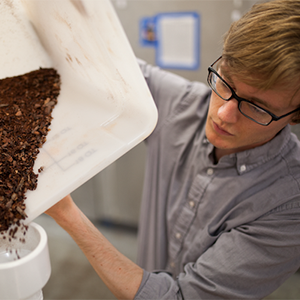 I run a start-up bean-to-bar chocolate making company here in Madison, called Wm. Chocolate. About half of my time goes into making chocolate, and the other half is spent on sales and other business-related activities.

Originally, I intended to study something very different: biochemistry. This idea lost its luster when a biochemistry professor displayed a detailed diagram of photosynthesis and said that we would spend the next four years staring at it. Quite suddenly I felt that my studies should involve a little more emotion and a lot more breadth, so I rearranged my schedule to start exploring the humanities. The ancient world had a certain irresistible appeal, I’m sure in part due to less-than-accurate television shows and films. Thus, I decided to try a Greek and Roman mythology class my first semester. It felt logical to also start Latin, to enrich and clarify my experience in the mythology class. I enjoyed both courses so much that I wanted to keep studying the area, but also felt that working in translation left a lot to be desired. That’s why I ultimately focused on Greek and Latin language classes. They in turn opened the door to incredible opportunities to work on archaeological projects abroad with Professor Aylward, which really sealed my interest in the major.

I think the most important result of studying Classics was that it taught me to trust my heart when making the big decisions in life–to choose what I loved over what might be seen as practical or normal. After all, choosing Classics guaranteed no obvious next step or job after graduation. But I knew if I picked a major that I loved, college and life afterwards would work out somehow. And they did. Not only did my Classics major contribute to college being a true pleasure, the positive experience I had with it has kept encouraging me to take stabs at doing what I really love, even when the payoff isn’t certain. It turns out that many of these decisions have not worked out in a direct sense, but they all kept me moving forward with confidence and helped me figure out who I am and what I want. Now, five years out of college, I consider myself lucky to know what is meaningful to me and to get to spend most of my time working on it. I don’t think I would have gotten here had I ignored my heart when choosing a major.

Not surprisingly, the strongest memories are of traveling to Turkey for archaeological research with Professor Aylward during two summers. Those trips were undoubtedly the richest, most immersive, and most unexpected educational experiences I have had to this day. More broadly, I remember with fondness the exceptional passion every one of my instructors (and even most of the students) had for their work. Perhaps because Classics is, let’s be honest, a bit off the beaten path, everyone who is doing it is doing it because they love it, not for money or glory or anything less. That was the magic of the major, and it has been an ongoing source of inspiration as I navigate life after college.