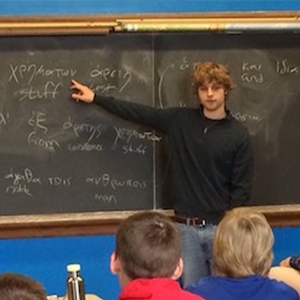 I’ve been teaching Latin full time at Wauwatosa East and West High Schools since 2014. I’m the president of the Wisconsin Latin Teachers Association on the executive board of the Wisconsin Association for Language Teachers. At school, I advise our chapter of the Junior Classical League, our Linguistics Club, and our Philosophy club.

I studied Latin in high school and a legendary teacher helped make it the only class in high school that I can say I looked forward to attending every day. I began my college career with a ton of AP credits and certain that I was to major in Classics, at least. My father is still hoping that I will try law school.

Whenever people used to ask me what I planned to do with my classics major (before I started pursuing a major in Education), I didn’t have an answer. I just knew that I loved the subject and would figure out some way to live having studied it. When a shiny new Latin Teacher Education program presented itself, I enlisted. It seemed like the best option for me since I didn’t want to be a college student anymore, and student teaching confirmed the decision. I think one of the greatest feelings of productivity a human can experience is to see another person understand or produce something new as a result of his teaching them. And teaching and studying classics exercises some of the most valuable skills humans can exercise: logic/reasoning, critical analysis, linguistics, reading, writing, philosophy. It’s safe to say that I spend more time reading, studying, and thinking about Latin and culture than I ever did in college. I suppose they’re paying me this time. In terms of the direct influences that remain, besides the obvious content-knowledge base and the fact that I am teaching what I’ve been taught, I keep in touch with almost every Classics professor I had class with during my undergrad. I, selfishly, ask them for books, teaching advice, and answers to questions of language.

Since I coasted through most of my other classes, the classics courses I took are generally the only important memories of my undergraduate career. Professor McKeown’s passion for Ovid was contagious, and two years ago when one of my students shouted “this guy’s a genius” after reading that part about Cupid stealing the 6th foot, well, that was one of those moments I guess. Professor Brockliss was the first person to teach me how to teach Latin specifically (instead of how to teach in general), and I scored a cozy tutoring job after guest-teaching a 100-level Latin class under his supervision. Reading Homer in Professor Nelsestuen’s class holds a special place of pride in me. There’s something about the mere act of reading Homer that is inspiring, like “I’m really reading Homer right now”. That also happens to be the first time I made friends in the classics department. We would sit together on a bench down the hall from the classroom and do our translation homework at mach-speed in the 50 minutes we had before class started (maybe that was just me who hadn’t done their homework the night before?). We called our elite club, The Benchwarmers. Asa contacted me a couple months ago needing scanning help. I think he’s still studying comparative literature in grad school now, unless he graduated. I never got into Shakespeare, yet. I appreciate Plato’s Apology of Socrates much more now than I did in Professor Beneker’s class. I student taught it to an independent study student who was much better at Greek than I was at the time, so she helped me understand it at a time when I was able to.