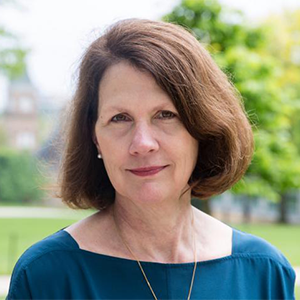 Laura McClure’s diverse research interests focus on Athenian drama, the study of women in the ancient world, and classical reception. Her publications include books on the representation of women in Athenian drama and the courtesan in the Greek literary tradition: Spoken Like a Woman: Speech and Gender in Athenian Drama (Princeton, 1999) and Courtesans at Table: Gender and Greek Literary Culture in Athenaeus (Routledge 2003). She has edited three volumes on the subject of women in antiquity, including Making Silence Speak: Women’s Voices in Greek Literature and Society, with André Lardinois (Princeton, 2001), Prostitutes and Courtesans in the Ancient World, with C. A. Faraone (Wisconsin, 2006), and Sexuality and Gender in the Classical World (Blackwell, 2008). She has published numerous articles, most recently an analysis of the role of women in tragic recognition scenes. She is currently completing a textbook about women in ancient Greece and Rome (under contract with Blackwell). Another project on the reception of the Greek chorus is underway. Laura regularly teaches advanced Greek language courses, Women and Gender in the Classical World, Civilization of Ancient Greece, and Ancient Drama in translation.