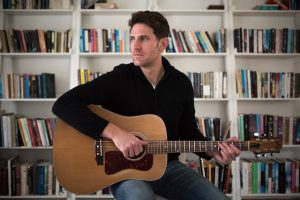 I am a full-time musician with several facets to my career: the most relevant to my education in Classics is that I travel the country as a modern bard performing a 30 minute one man original musical interpretation of Homer’s Odyssey for mostly high school and college audiences. I’ve done this piece over 200 times in 32 states (and Canada). I use the performance to spark discussion around epic poetry, oral tradition, and classical culture, and to try to make the story of Odysseus (and the mode in which it was originally transmitted) relevant for modern audiences. After years of operating on my own, I am now partnering with The Paideia Institute.

I had a couple of chance encounters with interesting rogue Ancient Greek words over the course of high school. When I got to Madison as an intending Psychology major, I took Ancient Greek on a whim my first semester and fell in love with it. Courses in classical culture (Greek Myth with Barry Powell, Greek Archaeology with John Bennet) followed and by my sophomore year I was a Classics major.

I worked at a law firm as a paralegal for a number of years before pursuing music full time. In that capacity, my major gave me a great background in critical analysis and writing. At the same time I was writing my version of Homer’s Odyssey, which was informed intellectually by my close study of The Odyssey in a number of different contexts: philology, reception, and literary. And now, as I am lucky enough to travel to college campuses across the country to perform, my UW Classics degree continues to inform me both in the intellectual sense and in the community sense (there are Badgers everywhere!).

I loved studying Ancient Greek more than anything. I had 9 semesters of Ancient Greek by graduation, including Ancient Greek Composition. Highlights were the variety of viewpoints and strengths I experienced in classes with incredible professors: Patricia Rosemeyer, Jim McKeown, Barry Powell, Laura McClure, John Bennet and more. Also, I was lucky enough to be accepted (as an undergrad) socially and intellectually into the group of graduate students with whom I wound up taking upper level seminar courses… this group included a number of people who are still in the discipline: Alex Pappas, Holly Sypniewski, and Matt Semanoff, to name a few. Because of this I often feel as if I was challenged as a graduate student would be, which was exhilarating and rewarding.