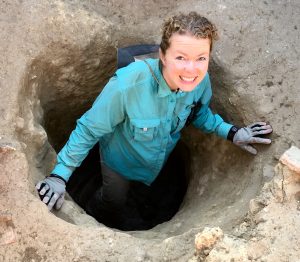 Andrea received her B.A. from the University of Wisconsin in Classics and Art History in 2010, M.A. from the University of Kansas in Classics in 2014, and a second M.A. from Bryn Mawr College in Classical and Near Eastern Archaeology in 2017.  She is currently finishing her PhD at Bryn Mawr College. Andrea’s dissertation examines the function and symbolism of representations of fruits and nuts offered in Greek sanctuaries within the context of sacrifice, offerings, and diet. She is also interested in agriculture, sculpture, architecture, cross-cultural interaction, and specializes in Magna Graecia.  Andrea’s research also incorporates digital humanities, including conducting digital surveys with Google Earth to locate quarries and study transport roads in Sicily, ultimately revealing a more complex and nuanced ancient construction process.

Andrea has excavated at the Villa delle Vignacce in Rome, the Porta Marina in Ostia, Gournia in Crete, Corinth in Greece, Tharros in Sardinia, and has worked at Morgantina in Sicily since 2015.  Her digital archaeological survey skills took her to Morocco to work with the Urban Economy of Volubilis Project.  Andrea was an associate member at the American School for Classical Studies in Athens (2018-2019).

In addition to archaeology, Andrea’s passion for the humanities led to her new role as the Assistant Director of the Constellations program at UW-Madison.  She believes strongly that the humanities make you a better person and hopes that through Constellations courses, UW undergraduates will gain a heightened sense of empathy and develop new ways of seeing the world.

When I started at UW-Madison I planned on being a high school math teacher. I had always been intrigued by ancient Greece, but had no idea that I could make a career out of studying it. After taking Classical Mythology on a whim during my freshman year I decided to continue to explore this interest. I took Greek archaeology courses the following year and was hooked: I had to be a classical archaeologist. I had always dreamed of visiting Greece, but had planned to do so when I retired. The idea of spending my summers excavating in the Mediterranean and the rest of the year studying it sounded like a much more interesting way to live than my previous plan. I talked to advisors to learn the next steps and changed my major without having taken any Latin or Greek classes. Changing my life path at 20 was terrifying, but it was the best choice I have ever made.

My Classics major still helps me today, as I still read Greek and Latin for graduate school, and has also served as a foundation for learning Italian and modern Greek, both of which are key for my studies and travels. Being able to speak Italian has drastically enhanced my experiences in Italy both in and out of the trench and enables me to confidently travel to more remote locations where English is not spoken.

On a broad level, my undergraduate major helps me in my everyday life. Learning new languages allows you to think about situations from another perspective, teaching students to be both empathetic and inquisitive while enabling students to immerse themselves in another culture. Studying Latin, Greek, and archaeology teaches you how to question your sources and consider why someone might have a particular opinion, which is useful both inside and outside of academia. Also, learning languages teaches you to work within a systems of rules, using critical thinking to solve an intricate puzzle. This type of problem solving can be applied broadly and used in everyday life. What people don’t often realize is that even though you might not actively be translating Latin or Greek, you’re still “using” your major by using the skills you learned in that major.

I have so many fond memories from my experience with the Classics department, both in and out of class. In class, I made great friends and had fantastic TAs and professors who were excited to teach us. The department was always supportive of my goals and helped me to get where I am today.

Out of class, I participated in Classics Society, in which we invited professors to give lectures and hosted events to bring the department closer together. Classics Society was a great way to bridge the gap from classmates to friends, as well as good practice for organizing events and inviting lecturers.

It’s amazing how taking one class my freshman year entirely changed my life. I cannot thank the Classics department enough for always encouraging me and helping me achieve my goals. After changing my major to Classics I studied abroad in Athens, found a near life-size marble statue during an excavation, worked as a tour guide in Rome, got into graduate school, and get to continue to excavate and travel every summer—all things that I never would have done had I not changed my major. Thank you!