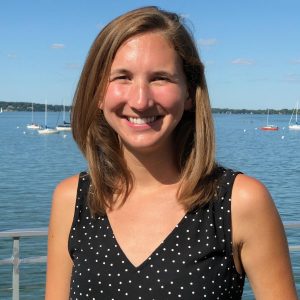 Molly Harris earned her B.A. in Classical Languages and Literature from the University of Michigan (2012) and her PhD in Classics from UW-Madison (2019). Her most recent research looks at the aftermath of war within three Greek tragedies: Aeschylus’ Agamemnon and Persians and Euripides’ Trojan Women. Focusing on the physical and emotional movement between the sphere of war and what comes after it, Dr. Harris is interested in how these tragedies portray the negative and extensive impact of war on soldiers and their families, particularly how and why these narratives depart from the epic model of Odysseus’ homecoming in the Odyssey. Dr. Harris’s research has also included work on the ambiguities of sound and language in Euripides’ Alcestis; the characterization of individuals and groups in Thucydides; and approaches to civil war and clementia in Cicero’s Caesarian speeches and letters.

Dr. Harris is highly engaged in teaching and the public humanities. She has been an active member of the UW Teaching Academy for over 5 years, and has earned multiple teaching awards, including a campus-wide teaching assistant award for her service to teaching and learning at UW-Madison. She has also interned with the National Endowment for the Humanities in Washington, D.C., and for two years led a local reading group of ancient and modern war literature in collaboration with the Wisconsin Veterans Museum in Madison, a project supported by the Public Humanities Exchange at UW-Madison’s Center for the Humanities. Within CANES, Dr. Harris has taught introductory and intermediate Latin courses and led sections of Greek Civilization, Classical Mythology, and Ancient Religions of the Mediterranean. She has also taught related classes in Integrated Liberal Studies and the Summer Collegiate Experience, and she is currently a Faculty Assistant at the Writing Center and a member of the Writing Center’s Outreach Team. In her free time, she enjoys reading, running, and (most recently) strumming the ukulele!