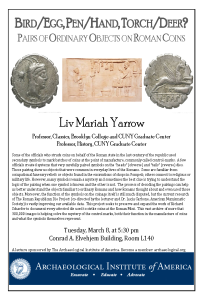 “Bird/Egg, Pen/Hand, Torch/Deer? Pairs of Ordinary Objects on Roman Coins”
Abstract: Some of the officials who struck coins on behalf of the Roman state in the last century of the republic used secondary symbols to mark batches of coins at the point of manufacture, commonly called control-marks. A few officials created systems that very carefully paired symbols on the “heads” (obverse) and “tails” (reverse) dies. These pairing show us objects that were common in everyday lives of the Romans. Some are familiar from occupational funerary reliefs or objects found in the excavations of shops in Pompeii; others connect to religious or military life. However, many symbols remain a mystery and sometimes the best clue is trying to understand the logic of the pairing when one symbol is known and the other is not. The process of decoding the pairings can help us better understand the objects familiar to ordinary Romans and how Romans thought about and even used those objects. Moreover, the function of the symbols on the coinage itself is still much disputed, but the current research of The Roman Republican Die Project (co-directed by the lecturer and Dr. Lucia Carbone, American Numismatic Society) is vastly improving our available data. This project seeks to preserve and expand the work of Richard Schaefer to document every attested die used to strike coins at the Roman Mint. This vast archive of more that 300,000 images is helping solve the mystery of the control marks, both their function in the manufacture of coins and what the symbols themselves represent.