The Classics Camp is on hold until further notice. Check back here for updates.  In the meantime, please contact us at outreach@languageinstitute.wisc.edu with any questions.

Are you fascinated by the mythology of ancient Greece and gladiators of ancient Rome? Percy Jackson and the Olympians? Latin spells in Harry Potter? 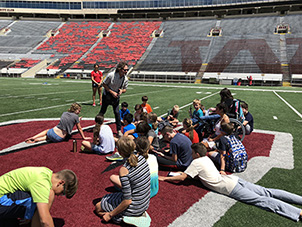 Explore the rich and fascinating worlds of ancient Greece and the Roman Empire in this Classics Camp on the UW-Madison campus. Through interactive activities, students learn about everyday life in ancient Greece and Rome, including myth, history, drama, art and architecture, clothing, and food. Students also learn a bit of Ancient Greek and Latin (don’t worry, it’s not that hard!) and find out about their roots in the English language we speak today (impress your friends and family when you write their names in ancient Greek!). Students also explore how classical civilizations of ancient Greece and Rome are foundational points of reference for modern fiction like J.K. Rowling’s Harry Potter and Rick Riordan’s Percy Jackson. 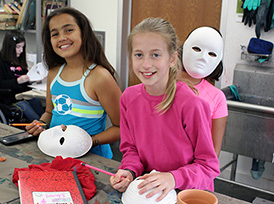 Join us to delve into the ancient world of the Greeks and Romans through stories, archaeology, monuments, language, and arts and crafts! Campers will paint their own Greek vase and make their own toga. They will also learn about the fabled city of Troy and the saga of the Trojan War, stories of the Olympians and the birth of tragedy in ancient Greece, the wonders of the Parthenon in Athens and the foundations of democracy, the gladiators of the Colosseum in Rome and the rise and fall of the Roman Empire. Campers will also explore reflections of classical civilization right here on campus at places like Camp Randall, the Memorial Union, and the Chazen Museum of Art.

Sponsors: The Classics Camp is a program of the Department of Classical and Ancient Near Eastern Studies (CANES) and the Language Institute.

The Classics Camp is grateful for funding from Classics Everywhere, an initiative of the Society for Classical Studies, to help increase access to classical studies among traditionally underserved populations.